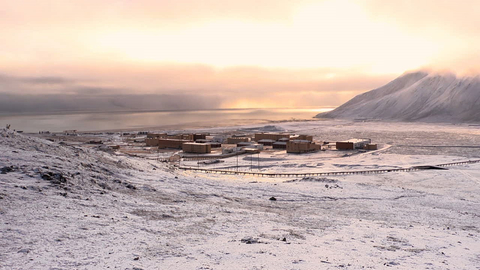 In a vast apocalyptic frozen landscape a lost traveller arrives at a ghost-town surrounded by eternal ice and glaciers. People seem to have left overnight: furniture, books and palpable traces of a former community lie under a numb white veil of ice and death. The traveller's loss of memory will be absorbed by his imagination and the omnipresent past until loosing himself in neverland: whispering voices tell about the utopia-like life in the former coal-mining town and about the tragic airplane crash that led to its abandonment in the late 1990ies.

In a place that seems out of the world, close to the North Pole, human utopia is stroke by cruel destiny and decay.

“The Chronicles of Polyaris” is a surreal portray of the abandoned Russian settlement Pyramiden on Spitsbergen from the point of view of a traveller lost in space and time.