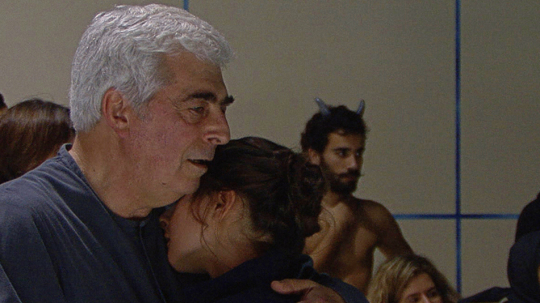 Luís Miguel Cintra, renowned actor, stage director and director of the Portuguese theatre company Teatro da Cornucópia, staged the play Illusion in early 2014. This play was based upon texts by Federico García Lorca. However, the 119th company’s show was no ordinary show, for in the cast there were 59 non-actors, amateurs and theatre students.

Following a challenge by Luís Miguel Cintra, the actress and director Sofia Marques accompanied and documented the whole process: since the first candidate interviews, the cast selection, the rehearsals, the premiere, up until the last presentation of the play.

“Illusion” documents this unusual experience and reveals the way in which Luis Miguel Cintra welcomes and directs his new accomplices in order to bring to life Lorca’s ‘Illusion’.

More than delusion of the senses or blurred utopia, the illusion that lives in this film is closely linked to dreams, desires, wills, fantasies, and its chances of substantiation. In the realm of endless possibilities, this illusion regains meaning, transfigures and materialize itself.