Isabel Machado was born in Lisbon in 1974 and is C.R.I.M.'s directing manager and producer. She has a degree in Communication Design from the Lisbon University. She studied Visual Arts at Maumaus School of Photography. Since 2002 she is a full time producer of films and artistic projects. Finalist of the workshops in development and production of films EAVE 2005 and documentaries EURODOC 2008, she is now doing her PhD on Performing Arts and Moving Images at the University of Lisbon. She is responsible for the development, production and distribution of institutional videos, documentary and fiction films and visual art projects in C.R.I.M.

Christine Reeh-Peters is a German filmmaker, curator and philosopher living between Berlin, Karlsruhe and Lisbon. Since 2019 she is a junior associate professor of artistic research in digital media at Babelsberg Film University KONRAD WOLF in Potsdam, Germany. PhD in Philosophy of Art and Aesthetics at FLULisbon in collaboration with the University of Bonn (Germany) in 2017. After many years as producer and filmmaker in Lisbon at C.R.I.M. (of which she is a co-founder), she was director of the Cinemathèque in Karlsruhe. As a filmmaker and thinker, she explores the complexity of "reality" and the links between philosophy and art, narration and image. Director and award-winning author of over 10 films supported by film institutes in Portugal, Germany and Norway, and shown internationally at festivals (Doclisboa, Nouveau Cinema, Jihlava, Docupolis, IDFA etc.), cultural centres, museums and art galleries, as well as on various cultural television channels. She is a member at the editorial board of JAR - Journal for Artistic Research, co-leader of the NECS film-philosophy workgroup and has been publishing articles and editing anthologies in the context of film and philosophy. https://reehchristine.academia.edu/

Sara Caixinhas was born in Lisbon in 1976﻿. Since 2008﻿ she has been the accountant manager and a production assistant at C.R.I.M. She studied Film at the National Portuguese Film School ESTC, specializing in Production (1994/97). She has 15 years of experience in production, working in cinema and television projects, as production assistant and/or production accountant, for movies, programs and commercials, and also as producer manager in a TV Channel (2002/2007). 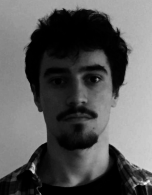 João Pedro Duarte has a degree in Film from the National Portuguese Film School ESTC, specialized in the area of Editing.

He has been working as an editor, editor assistant  and continuity supervisor in various films and artistic projects. He is responsible for the editing department in C.R.I.M. and also develops activities to support the communication in social networks.