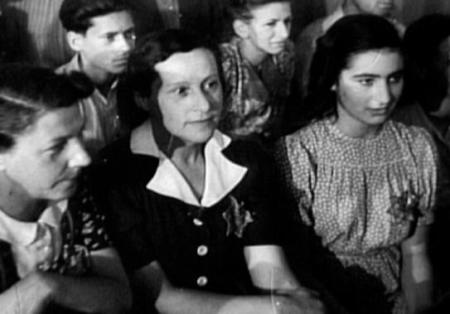 The film work “Face” is based on the NS propaganda film Terezin: A Documentary Film of the Jewish Resettlement. The film, made by the Nazis from August until September 1944 in the style of a documentary, was meant to present the apparent good standard of life in the ghetto Terezin and, thus, veil the policy of annihilation of the NS regime. What can be seen are the prisoners in Terezin as they sew, in the concert hall, at the pool in the evening sun, during a talk of a professor in the community library, etc. A 23-minute fragment is all that remains of the propaganda film.

Guided by the desire to place temporal gaps and holes in the apparent homogenous narrative structure of the propaganda film, Christoph Korn decelerated the film many times over. The 12 hour film he created this way forms the basis for a conversation that Antoine Beuger and Christoph Korn had along the film on June 3, 2012. This conversation accompanies the film as its soundtrack.

The conversation is borne by a peaceful, tentative, often silent sense of approaching and receding. In the course of the conversation, a type of reading gains both duration and power, a type that becomes condensed in the concept of the “Face” (Emmanuel Lévinas). “Face” in the sense of the philosopher Lévinas is “...the other, who reveals him or herself through the face.”