THE MAN OF THE CROWD 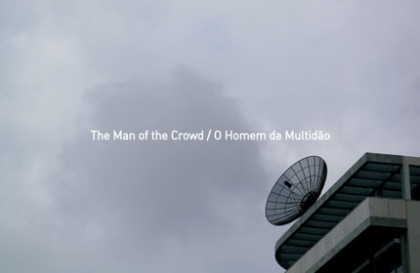 This piece consisted of two phone lines linked to one auto-reply with a previously recorded text. The phone numbers appeared on posters around the city. When calling, every passer-byheard the story of the second part of the tale 'The Man of the Crowd "by Edgar Allan Poe (in English or Portuguese, according to the number that had been chosen). The narrator describes his thoughts, the city, the pursued﻿ figure and the persecution itself.﻿

This piece does not occupies space, just time; it’s ubiquitous but invisible

– it’s present in the avenue and in the alley, in the whole city and it’s about it;

it’s democratic but intimate – it’s whispered to all passers-by; it’s a small fold in the visible – two synchronic but non coincident cities and just one citizen that reads the world, the city, through what he hears.

This piece is not relational art nor does it creates micro-utopias; the spectator acts but doesn’t become artist, of course; it’s politics but not paternalistic nor orthopedic.